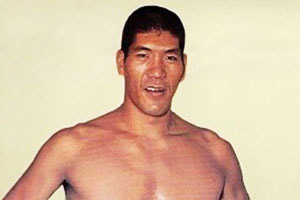 Starting in Southeastern Championship Wrestling at this time the group was a trio including Dennis Condrey, Norvell Austin, and Randy Rose. It wasn't until they ended up in Mid-South Wrestling after a trade between Bill Watts and Jerry Jarrett. Jim Cornette, Bobby Eaton, and Dennis Condrey were sent to Bill Watts from Jerry Jarrett alongside Rock N Roll Express to begin the hottest rivalry in wrestling during the era. Bobby and Cornette had worked together in the past before they were traded in Memphis, but Dennis was tagged with Phil Hickerson in Memphis before the trade. The new Midnight Express trio clicked almost immediately with two major feuds heating up the territory. The Midnight Express would work against Rock N Roll Express, Bill Watts and others which helped the trio become the hottest act in wrestling for a time. An early feud for the Midnight's included fighting Magnum TA and Mr. Wrestling II which was the feud that would lead to Magnum's ascension up the card as Mr. Wrestling would turn on Magnum shortly after the feud with Midnight's.

In 1987, Dennis Condrey would suddenly depart Crockett Promotions and wrestling leaving Bobby Eaton in need of a new partner which he found in former Fabulous One Stan Lane. Again we saw smooth transition with Stan taking the open spot and the Midnight's would maintain the top spot in their new home Jim Crockett Promotions. Midnight's arrived in Crockett in 1985 and would continue their feud with Rock N Roll Express, Road Warriors, The Fantastics, and others before starting the dream rivalry. In mid 1988, Midnight Express would begin a rivalry against The Four Horsemen specifically Tully Blanchard and Arn Anderson. This is a feud that fans had wanted to see but never thought they would, because both teams were heels at the time. Unfortunately, Anderson and Blanchard would make the jump to WWF in late 1988 ending the dream rivalry before it really got going.

Everything would go downhill from the short lived dream rivalry as the next feud with the Original Midnight Express and Paul Heyman would again get cut down before it got going again due to outside forces changing and preventing the original plan from taking place. Cornette and Stan Lane would both leave JCP in 1990 after seven years with the promotion leaving Bobby Eaton behind in WCW. As usual it is impossible to understate the impact that the Midnight Express had on wrestling as the chemistry each incarnation had made each member a legend. Even though all the members were different type of workers they were able to make it work and show how being a career tag team wrestler could allow for a wrestler to have a solid career. In my opinion, Bobby Eaton is one of the most underrated wrestlers ever to step in the ring especially considering the fact that he started wrestling at 17 and would still be in the ring into his mid 40's. As for Jim Cornette he is undoubtedly among the greatest managers in wrestling history and the main reason for that is the success he had with the Midnight Express. At this point, Midnight Express had joined Gordon Solie as the next inductees into the Wrestling Express Hall of Fame Class of 2021. This includes Norvell Austin, Randy Rose, Dennis Condrey, Bobby Eaton, Stan Lane, Big Bubba Rogers and Jim Cornette. 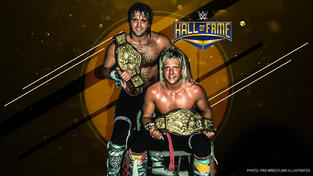 For the most part tag teams in wrestling don't last forever unless you are the Rock N Roll Express as Ricky Morton and Robert Gibson have been a tag team on and off since early 1983. It's been 37 years since the first time Ricky and Robert first teamed together after being put together by Jerry Lawler and Jerry Jarrett in Memphis. At first Rock N Roll were put together to try and recapture the magic that Jarrett & Lawler had found with the Fabulous Ones. However, Gibson and Morton wouldn't find a lot of success in Memphis as by years end they'd be in Mid-South Wrestling after a trade between Jarrett and Bill Watts which sent Rock N Roll to Mid South with Dennis Condrey & Bobby Eaton. While members of the Mid-South roster Rock N Roll would begin their legendary feud with the Midnight Express and Jim Cornette which would continue in various territories up till the end of the decade.

Prior to coming together as a tag team both Ricky Morton and Robert Gibson would have tag team success in various territories. Ricky Morton would team with Eddie Gilbert & Ken Lucas specifically in Mid-South, Memphis, or Southwest Championship Wrestling. Robert would become famous teaming with his brother Ricky Gibson to form one of the more successful teams in southern wrestling, but would never receive national exposure. Morton & Gibson would follow their rivals the Midnight's to Jim Crockett Promotions in 1985 and in turn become national stars for the first time in their careers. There is no doubting that the Rock N Roll Express were a major reason that Jim Crockett Promotions were able to assemble one of the greatest rosters in wrestling history at the height of the promotion.

Both Ricky & Robert would stick with JCP through the WCW transformation, but would disappear for the national eye after leaving WCW in 1993. For years to come they would pop up in various places through the years actually spending time in every national promotion. Even though they might not have won championships everywhere they both spent time in WCW, JCP, WWE, ECW, NWA-TNA, NJPW and the new NWA. It would be an understatement to call Ricky & Robert legends they are not only nine times NWA World Tag Team Champions, but they're among the greatest tag teams of all time and it is my pleasure to induct them into the Wrestling Express Hall of Fame Class of 2020. 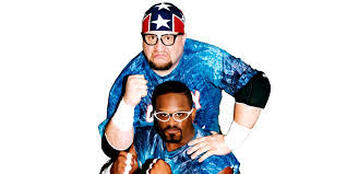 This was a tough choice because there have so many legendary tag teams through the years in wrestling. Names like the Midnight Express, Rock N Roll Express, Steiner Brothers, and various others populate a very deep and proud past for tag team wrestling. However, I think one team echoes the success and is part of the reason a match against The Steiner's was such a dream match. Since 1996, the Dudley Boys have been a prominent force in the world of wrestling from their ascension up the ranks in ECW to WWE to TNA always becoming Main Event stars.

​The team would fight and defeat every top tag team in Extreme Championship Wrestling having classic matches with the Eliminators, The Gangstas, RVD & Sabu, and a few others I might've missed. It is matches with these guys that ended up getting them on the WWE's radar and signed by the company in the summer of 1999 and this is where the team would become not just mainstream stars, but enter into status of legends. The reason for that is Tables, Ladders, and Chairs and their legendary two year long feud with the Hardy's and Edge/Christian. For six years the Dudley's would be a staple of the WWE's tag team division before heading south to TNA Wrestling in 2005 becoming one of the first teams to actually jump ship together.

While in TNA it would more of the same for Bubba & Devon as they would lead the TNA tag team division on and off for almost a decade capturing the TNA, NWA, and IWGP Tag Team titles while under contract to the company. It was also in TNA that Bubba would capture the TNA World Title on two occasions under his alter ego Bully Ray which shocked a lot of people the success he had in singles competition. The Dudley's would return to the WWE the night after Summerslam in 2015 for one last run with the WWE leaving the company a year later. Now Devon is semi retired and Bubba still competes occasionally in Ring of Honor, but they are members of the WWE Hall of Fame Class of 2018. I also want to officially welcome them into the Wrestling Express Hall of Fame Class of 2019. Oh My Brotha Testify!!!!! 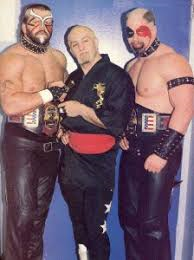 There is no doubt that the Mad Max is the one movie that has influenced the wrestling more than any other movie and to see it you have to look no further than the Road Warriors. In 1983, Georgia Championship Wrestling booker Ole Anderson came up with the idea to pair then fledgling talent Animal with incoming Michael Hegstrand and the rest as they say is history. Originally the legendary team was a group known as the Legion of Doom led by Paul Ellering the group also included Jake Roberts, and Don "The Spoiler" Jardine. During the 1980's wrestling experienced a golden age within the ranks of tag team wrestling and in a way the Road Warriors would be leading the charge as they became a top team in every company they were apart of from the AWA to All Japan to GCW to Jim Crockett and others. They really began to become major stars in the states when they arrived in the company later to be known as WCW. Within weeks of their arrival in JCP they would become the first ever Jim Crockett Sr. Memorial Cup champions and the following year would see them a part of the first ever War Games match with Dusty Rhodes & Nikita Koloff against the Horsemen.

​Though in many ways the Road Warrior did have a shelf life for how long they could stay in one place due to both their gimmick and the fact that after a while they couldn't turn heel. I mean the term "Road Warrior" pop didn't happen just after they retired it was something that was happening during their careers too. I can't think of any other team in wrestling history that has won tag team gold in every territory they have ever been in including the AWA, WCW, Mid-Atlantic, WWF, AJPW, and many others. During their career a lot of stories point to Paul not just being a mentor to both Animal and Hawk but also the business manager for the team during their entire career. The Attitude Era didn't just bring changes to the perception of pro-wrestling, but also in many cases saw the end of the Road Warriors style of wrestling due to idea that they had to dominate and never really sold.

​Overall I don't think there is a better first tag team to induct into the Hall of Fame as both Animal and Hawk became legends not because there singles career, but because of all they did in tag team wrestling. In many ways it was the Road Warriors that paved the way for teams like the Dudley's to have such a legendary career in tag team wrestling. Without the Legion of Doom... Without the Road Warriors.... Without whatever you want to call them either way it is hard to understand what wrestling what would be like had Eddie Sharky never trained them and if they would've remained at that bar in Minnesota. I would like to welcome Hawk & Animal the Road Warriors into the Wrestling Express Hall of Fame.